(Dallas—March 12, 2022; 8:30 a.m.) — Despite the well accepted role of liver-directed therapies (LDT) for colorectal cancer liver metastases (CRLM), only a small proportion of Medicare beneficiaries with CRLM undergo LDT or receive an outpatient consultation with a hepatobiliary surgeon, according to research presented at the Society of Surgical Oncology 2022 International Conference on Surgical Care. 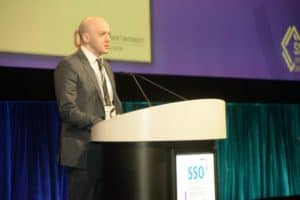 Of those who did not undergo LDT, only 4.7 percent had outpatient consultation with a hepatobiliary surgeon. Only 114 hospitals were considered high-volume hepatobiliary centers (defined as performing more than 20 annual hepatectomies for malignancy), and the estimated median distance to the nearest high-volume hepatobiliary center for patients was 40.4 miles (IQR=13.7-83.6). Furthermore, only 23 hospitals were identified as providing HAIC, and the median distance to the nearest HAIC center for patients was 130.2 miles (IQR=68.7-247.3). Patient factors independently associated with lower odds of LDT included older age, female sex, Black race, greater comorbidity burden, higher social vulnerability index, primary rectal cancer, synchronous liver metastasis, and further distance from a high-volume hepatobiliary center (p < 0.05).

“Despite the well accepted role of liver-directed therapies for colorectal cancer liver metastases, only a small proportion of Medicare beneficiaries with CRLM undergo LDT or receive an outpatient consultation with a hepatobiliary surgeon,” Dr. Aquina said. “Increasing access to specialized centers with expertise in LDT, particularly for Black patients, those with higher levels of social vulnerability, and long travel distances, may improve outcomes for patients with CRLM.”

This website uses cookies to improve your experience while you navigate through the website. Out of these, the cookies that are categorized as necessary are stored on your browser as they are essential for the working of basic functionalities of the website. We also use third-party cookies that help us analyze and understand how you use this website. These cookies will be stored in your browser only with your consent. You also have the option to opt-out of these cookies. But opting out of some of these cookies may affect your browsing experience.
Necessary Always Enabled
Necessary cookies are absolutely essential for the website to function properly. These cookies ensure basic functionalities and security features of the website, anonymously.
Functional
Functional cookies help to perform certain functionalities like sharing the content of the website on social media platforms, collect feedbacks, and other third-party features.
Performance
Performance cookies are used to understand and analyze the key performance indexes of the website which helps in delivering a better user experience for the visitors.
Analytics
Analytical cookies are used to understand how visitors interact with the website. These cookies help provide information on metrics the number of visitors, bounce rate, traffic source, etc.
Advertisement
Advertisement cookies are used to provide visitors with relevant ads and marketing campaigns. These cookies track visitors across websites and collect information to provide customized ads.
Others
Other uncategorized cookies are those that are being analyzed and have not been classified into a category as yet.
SAVE & ACCEPT
Scroll to Top
Facebook-f Twitter Youtube